Get to Know the Bride and Groom 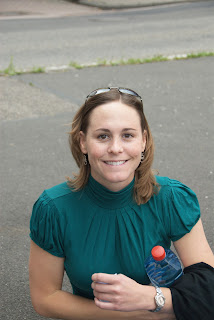 Jennifer Lynn Piantedosi was born in Fairfax, Virginia. She grew up in Herndon and lived in the same house for 24 years. She graduated from Oakton High School, Jenny earned her B.S. in Kinesiology from James Madison University in 2006.  She happened to fall into a nanny job which took her to exotic places such as Fiji, Australia, Bora Bora, New Zealand, Jamaica, the Bahamas, and Italy. Simultaneously, Jenny worked in Cardiac Rehabilitation as an exercise physiologist before she decided to go back to school. Jenny graduated from George Mason University in 2009 with a B.S.N. and is now a registered nurse on a cardiac unit at Fairfax Hospital.

Justin Conrad Fabian was born in Charlottesville, Virginia.  He grew up in Derwood, Maryland until the 6th grade when he moved down to Virginia Beach.  He graduated from Frank W. Cox High School in 2002 and was accepted to George Mason University where he received a B.S. in Psychology and a minor in Economics in 2006.  After graduation Justin went on a cross country RV trip to take in the wonders of this country.  Upon returning, he quit his job at Circuit City, at which he was employed full time throughout his four year college career.  He briefly worked at American Institutes for Research in Washington, DC, but the job was unfulfilling and the commute was atrocious.  When Accenture, a global consulting, IT, and outsourcing company showed interest, Justin came up with the most creative résumé he could, incorporating alliteration for every description on the document.  His gamble paid off and Justin has been employed by Accenture since July of 2007.  His official title is Contract Specialist, but if you want to know what he actually does, you’ll just have to ask him!

Jenny and Justin purchased a house in South Riding, Virgina in February.  Along with planning a wedding and Jenny beginning her new job, it has been a very busy time for the couple.  In order to maintain their sanity they have participated in numerous activities together.  They both enjoy biking, photography, traveling, hiking (although, lets call it what it really is – walking together!), ballroom dancing, and much to the demur of Justin, country music concerts.  Of course, no list of likes would be complete without the obligatory “long walks on the beach” (hey, Justin did spend ten years calling Virginia Beach his home!).
Posted by Justin at 6:41 PM